The end of the first week

Well, day 3 hit us with a high of 38 degrees… A very lazy day spent lazing around the pool with dad doing a bit of exploration (more on that later). The Villa’s gardeners made an appearance tidying up and generally making everything look good.

Ben spent most of the day revising all of his previous diving lessons and learning the new ones for his PADI Advanced Open Water course. A fun time was spent with dad working out the vagaries of PADI dive tables.

Dan spent most of the day in the pool occasionally venturing out to have something to drink.

Mum spent most of the day catching up on washing and cleaning… in between lazing by the pool reading books.

In the afternoon dad decided that enough was enough and that he was going to investigate the local beach. Following signs he made his way down to the local bar on the beach and had a coke. From there he thought it would be a good idea to have a walk on the shingle along the beach to the next set of steps up to the villa. Obviously drink must have been partaken as he removed his sandals and stepped out onto the shingle that had been baking in the sun for about 8 hours. Well, the crackling sound as his feet started to burn should have been the first warning sign, but he continued walking towards the sea braving out the sheer stupidity of walking on roasting stones. Later that day blisters could be found on all of his toes.

That evening we had takeaway chicken wings and ribs from Yialos Beach Restaurant.

Friday was the start of Ben’s diving. 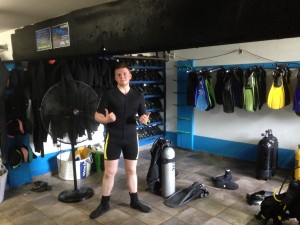 Ben and dad arrived at Latchi Watersports at 0830. with an instructor allocated (Steve from Cork) and a boat to ride in we were off to St Georges Rock for Ben’s first dive. Dad was there just for the fun of it. The first dive went well with Ben completing all of his skills and drills. The second dive was a fun dive involving underwater scooters. A fantastic 45 minutes underwater being towed by scooters looking at the scenery was awesome. At the end of the dives Ben stayed at the dive centre ready for his navigation dive. Dad went home to shower and relax before taking mum and Dan to Aphrodite’s pool to see Ben go diving and also to view the local scenery. 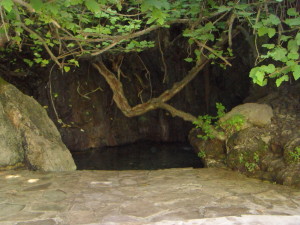 Aphrodites pool wasn’t as spectacular as you might think, but it killed time while we all waited for Ben to finish diving. Coming back from the pool we were accosted by a local fruit seller who sold us a stack of fruit Unfortunately the path down to the dive site was a bit steep so mum decided to stay by the car. Dad and Dan walked down to the beach leaving mum with no money or water for about 45 minutes… Dan and dad returned to a very pink looking mum who was leaking from every orifice known to man and some that aren’t. 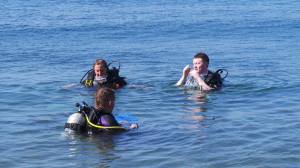 Ben successfully completed the dive and then drove back to Latchi to complete some knowledge reviews.

The diving so far had been to get Ben prepared to dive on the Zenobia Wreck just off the coast from Larnaca. The day started early with dad and Ben up at 5 in the morning to get themselves over to Latchi to catch the transport to Larnaca. 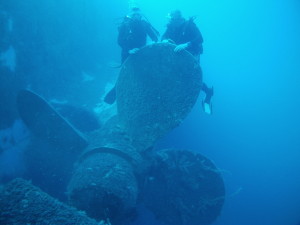 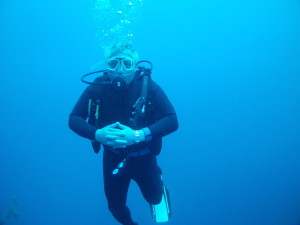 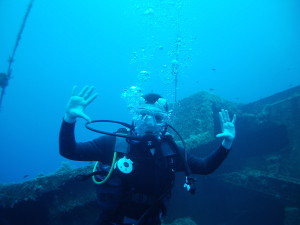 The dive guide and Ben’s instructor for the day was Steve (a young lad from Cork) drove us over to Larnaca via McDonalds for breakfast. The dive boat was fairly busy with about 50 divers in total onboard from various dive schools and shops. We were allocated a spot at the front of the boat where we stored all of our equipment and started to kit up for the first dive. Another first for Ben was diving in a full wetsuit and a hood. Soon enough we were all kitted up and entered the water. Dad was in first and took some time to cool down while waiting for Ben and Steve. The start of the first dive was nerve wracking as the water was crystal clear and the side of the wreck could be clearly seen from the surface. The first part of the dive was to check buoyancy on the side of the wreck. That completed we made our way over the side and started to fin towards the rear of the wreck. Slowly Steve took us down to Ben’s target depth of 30m. From there we made our way around to the props for a photo shot. From there it was back to the side of the wreck and up to 6m for a safety stop. From there back to the surface and back on board. The second dive took place about 90 minutes later. This time Steve took us around the front of the wreck where there was far more fish life, large grouper and barracuda everywhere. This part of the dive was quite disconcerting as we could see stairs and ladders but in the wrong position. This did cause a bit of vertigo at one point. From there it was back to the surface and get ready for the onboard BBQ. Luckily enough we were at the start of the queue and were able to get decent platefuls of BBQ chicken, salad and other local dishes. Soon enough the day finished with a 2 hour drive back home and dinner that night was takeaway BBQ ribs and chicken wings from Yialos Beach Restaurant.

Sunday was spent relaxing. dad and Ben were very tired after their diving the day before so not much was done at all. Dinner was Spaghetti Bolognese.