A very early start with Bruce being surprised by the boys being up and showered. Even more surprising was when the boys offerred to start getting breakfast ready… 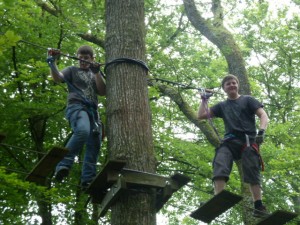 You can probably tell that Ben and Simon were off on a boys trip out. Even better the trip was a return visit to the Tree Tops Course. With breakfast out of the way everybody set out for the forest. The idea was that Ben and Simon would spend the day on their own while Bruce, Nicki and Daniel went to Dol-de-Bretagne. That all changed when Nicki saw how high the boys were on the course. 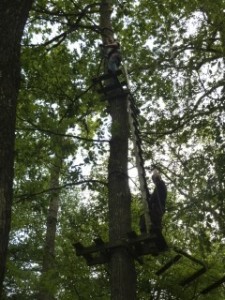 The day didn’t start well as when we turned up there was a bus load of kids in front. Bruce however managed to get Ben and Simon put to the front of the queue as they had already been through the training course. Unfortunately Ben didn’t do his harness up correctly and both him and Simon had to go through the basic training all over again. Training out of the way they went around route one as a warm up followed by route three as the pre-cursor to the main event. Route 4 and time and bravery permitting route five and six. 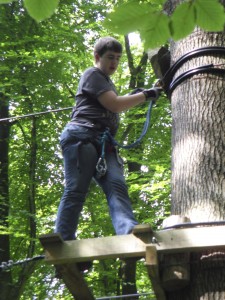 Route three went well with Ben and Simon working well over the obstacles. Previously due to time constraints they had been unable to complete route three so this was good practice.

Finishing the third route they moved to the start of Route four. The start of route four was a vertical climb up 20m of rough cut ladders. There was an issue here as Simon has size 12 feet and the ladders had not been built to accommodate such impressively sized feet. After much discussion with the course safety staff, much to Simon’s disappointment he was asked not to continue with the course as they were unable to suggest a way for him to climb the ladders. 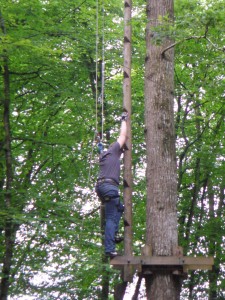 Ben continued on the route and successfully completed the route.

After a large lunch at the local bistro Ben and Simon were left to complete a couple of routes while everybody else went back to the Gite or went shopping.

With the tree courses all finished it was back to the Gite were everybody went swimming, although Bruce managed to fit in a short cycle ride (shortened due to a puncture).

The rest of the evening was spent playing cards or updating the blog.