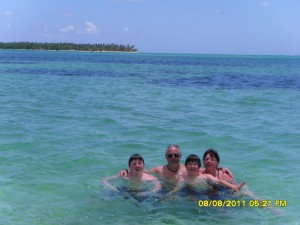 Today was supposed to be a split event day. Bruce and Ben were booked on a days diving, with Nicki and Dan off for a glass bottom boat tour. However Ben woke up with aching ears, which meant he couldn’t go diving. Change of plan – we all went on the glass bottom boat tour. The boat was a reasonable size, and there were only six people onboard not including the captain (Ringo).

We looked at two reefs, and then had 20 minutes to snorkel. The snorkelling was awesome. Dan had a great time flooding his mask and just generally lowering the level of the Caribbean by an inch or two; And giving Nicki heart failure. We saw loads of angel fish, parrot fish and various sorts of coral including brain coral.

After the snorkelling we went to Nylon Pool. A very shallow part of the reef where we just generally chilled out for about 20 minutes. See photo above.