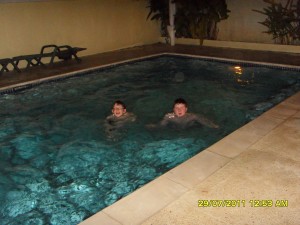 Landing at Tobago was uneventful, the first step in to the heat and humidity of Tobago was a surprise for everybody. Halfway to the terminal everybody had beads of sweat running down their faces, only to be met by the arctic conditions of the arrivals hall.

Passport control and customs took a while, but all of the staff were very friendly, and did their best to ensure that everybody was processed as quickly as possible.

Outside the airport we were met by Deon and Geewan our taxi driver. A 5 minute taxi ride later we arrived at Villa Kiskadee. Not long after arriving the boys were making full use of the amenities, and Nicki had found the wine.